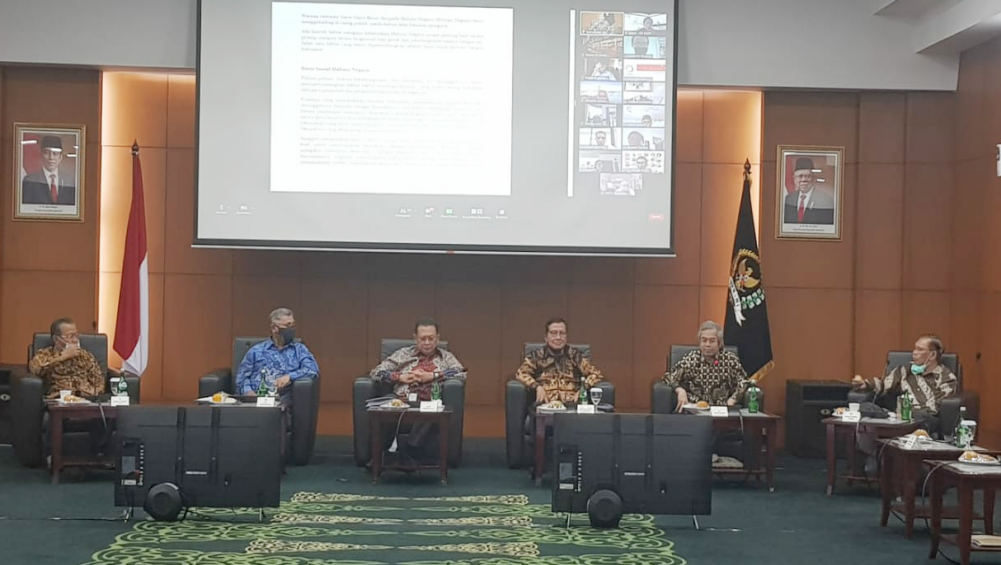 Bandar Lampung, Chancellor of the Indonesian Technocrat University Dr. HM Nasrullah Yusuf, SE, MBA, as the Deputy Chair of the Indonesian Chancellors Forum (FRI), delivered an introductory speech on behalf of the General Chair of the FRI Prof. Arif Satria, in the Focus Group Discussion (FGD) “Restoration of the Outlines of State Policy (GBHN)” at the MPR RI Building, Jakarta

The FGD which was initiated by the National Alliance, the Indonesian Chancellor’s Forum (FRI), the People’s Consultative Assembly of the Republic of Indonesia (MPR RI), the Indonesian Academy of Sciences and the Indonesian Political Science Association was held through a Zoom meeting.

Head of the National Alliance Pontjo Sutowo, conveyed the State Policy Based on Pancasila democracy. According to Pontjo, since the beginning, the founders of the Nation have tried to build a state administration system which is expected to be the basis for running the government.

However, along with the history of the nation, Indonesia’s constitutional system continues to change from generation to generation, starting from the parliamentary system, the old order, the new order to the reform era.

Meanwhile, in his introductory remarks representing the Chairman of the FRI, Dr. HM Nasrullah Yusuf gave an explanation about the importance of the urgency of the State Policy in the Pancasila paradigm.

Chairman of the MPR Bambang Soesatyo, MBA, was appointed as the keynote speaker with his presentation focused on the MPR program on the formulation of State Policy Principles that provide direction and equitable distribution of sustainable development in Indonesia.

A number of rectors of public and private universities were appointed as the discussants. Among them Prof. Karomani (Unila Chancellor), Prof. Amany Burhanudin Umar Lubis (Rector of UIN Syarif Hidayatullah), Prof. Asep Warlan Yusuf who is also an Unpar Constitutional Law Expert.