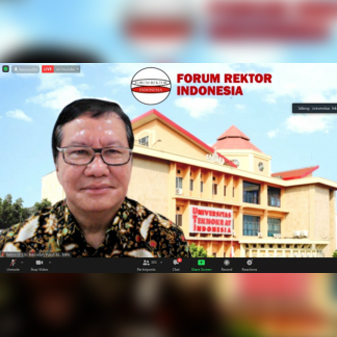 The implementation of the Mental Revolution Movement at the Indonesian Technocrat University carries the Indonesia Mandiri movement with the theme “Gen-Z builds the country for an independent Indonesia”. The Independent Indonesia Movement is divided into four series of activities, namely National Webinar, Focused-Group Discussion, Site Visit, and Creative Business Workshop. In the webinar which was held nationally, 512 participants consisting of university students and students from Lampung, Bengkulu, Jakarta, Malang, Lamongan, Surabaya and Makassar participated in the activity which was divided into two sessions.

Then continued with remarks and the opening ceremony by Prof. Dr. Arif Satria, M.Sc. Chairman of the Indonesian Chancellors Forum (FRI) who also serves as Chancellor of IPB University. Prof. Arif Satria said that this webinar was very appropriate to be held at this time because it coincided with the Mental Revolution Movement program to support the independence of the nation. Generation Z is a generation that is responsive, adaptive and technologically literate, they must now focus on not only best practice in entrepreneurship but also future practice and growth mindset so that this generation is ready to become a generation that is competitive and ready to work and able to create jobs later, “he said.

The event continued with a webinar moderated by Dr. H. Mahathir Muhammad, SE., MM. related to Personal & Business Branding. This material was presented by Zata Ligouw, a blogger and content creator. With the style of a young person, Zata delivered this seminar in a fun and flexible way. “Personal branding is important, it doesn’t mean social climbing. But we also have to keep improving ourselves and keep trying to be able to fulfill what we want to show. That is the importance of personal branding,” said Zata Ligouw. Zata also conveyed some of the benefits of this personal branding. No need for expensive things to make photos and personal branding. But we can take advantage of the features and maximize our ability to form a good personal brand.

The second session of the seminar was presented by Khaleed Hadi, founder of Impala Network. Khaleed shared his experience of how to build an Impala network at a young age, but has already succeeded. Khaleed’s principle in building his business is “United for the same, age does not matter”. “Get out of the house and look for problems and then provide solutions from there it can be a business,” said Khaleed. The second session was continued by Eka Setiadharma, a founder of Kopi Anjis and Addictea from Bandung which is loved by many young people today. Eka said that the younger generation must be able to create creative businesses with a dynamic style so that our business will continue to run for a long time. “In terms of promotion, it must be interesting and make it different from others, create customers who promote our services and the brand we have,” he said. Eka also showed the uniqueness of Kopi Anjis such as the announcement before the call to prayer made by the crew at Kopi Anjis in various languages ​​so it was very unique. There are Indonesian, Sundanese, and English.

The two speakers at the webinar session concluded that in order to maintain and run a business during this COVID-19 pandemic, entrepreneurs, especially young people, should not be afraid to innovate & make decisions to change. Khaleed added that entrepreneurs should not forget to always have a plan and reserve funds so that when an unexpected situation occurs they are much better prepared to deal with it. This series of Creativepreneur camp activities continues by training Indonesian Technocrat University students who already have businesses to participate in Focused-group discussions on the implementation of the Independent Indonesia Movement and Business Presentations held at the Horison Hotel. They are guided and motivated to change their mentality so that they are not only students who are ready to work but are also ready to build a business.

After that, the students were invited to visit creative businesses to learn from the success stories of creative business people in Bandar Lampung (10/12/2020). The first visit was held at Portfolio which is known as a forum for creative industry activists for young people in Lampung in making art products such as Nada Label, Triceat, Lalla, Wear, Von Gems, and so on. During this visit, students were mentored directly by the Portfolio Owner, Remia Putri Wulandari. The next visit was continued to Kiyotime cafe where students got insight from Rajib Abi Bakri (Co-founder) how to build a sustainable Food and Beverage business.

Furthermore, the Chief Executive of the 2020 Indonesian Technocrat University GNRM Achmad Yudi Wahyudin, M.Pd. admitted that this activity will continue to be carried out for the following year. “Because the participants were very enthusiastic and claimed to be very motivated to develop their business thanks to this camp activity, “God willing, this activity will be held again next year,” he said.