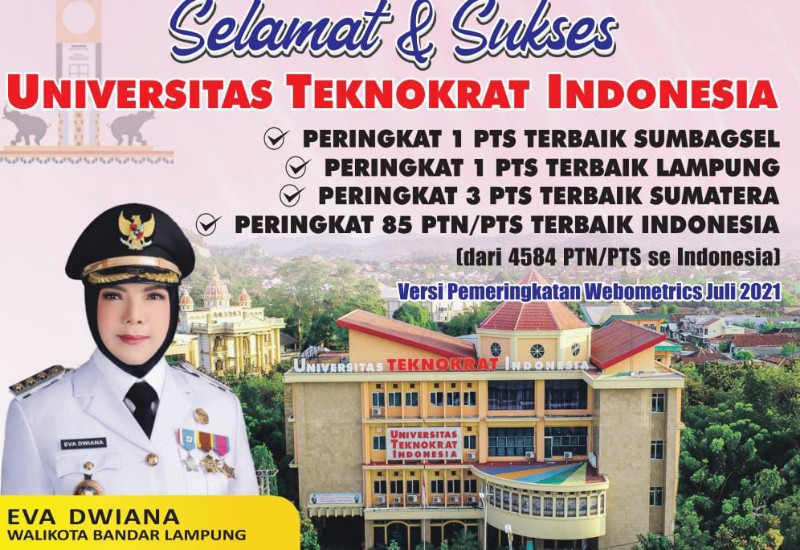 The Indonesian Technocrat University became the first best in the South Sumatra region according to Webometrics July 2021.
In Sumatra, the campus which is led by the Chancellor D H Nasrullah Yusuf SE, MBA is ranked III.

As for the national scale, still based on Webometrics, Technocrats are in the 85th position.

Eva Dwiana said that the campus of the Indonesian Technocrat University has so far made a major contribution to the world of education in Lampung. With this extraordinary rating, Mother Eva, as she is affectionately called, believes the Technocrats will be at the forefront.

He hopes that this achievement will be maintained and will be the best in Sumatra in the years to come.

The first woman to become mayor in Bandar Lampung explained that this must be supported by the quality of all academics at Technocrats.

Then it is also supported by the mastery of qualified technology. As well as the existence of a super complete and sophisticated campus infrastructure.

Eva Dwiana said that the quality of graduates from this campus was also tested in the alumni’s workplace. They, he said, mostly work in government agencies, private sector, and businessmen.

He hopes that cooperation with the Bandar Lampung City Government can be developed further. Including in terms of digital literacy that is being echoed.

He considered that technocrats with community service programs or PKM were able to manifest service in the true sense of the word to the community.

Eva specifically said that the role of technocrats for residents affected by the pandemic was very large. During last Ramadan, Technocrats gave thousands of packages of basic goods to residents through the Bandar Lampung City Government.

Deputy Chancellor I of the Indonesian Technocrat University, Dr. H Mahathir Muhammad SE MM, said that the campus is trying to be better in the future. He wants the quality of graduates and learning models to skyrocket.

This recognition based on Webometrics, said Mahathir, is believed to increase the confidence and confidence of the campus to compete with other entities. And compete to provide the number 1 educational service for all students. He also said that the strengthening of information technology on campus also supports the achievement of the Webometrics version.